The recent presentation on demographics from Mitch Silver provides a good overview of some of the population trends that will affect the future of Chapel Hill. (and it’s only online until December 12th, so encourage others to take a look!) 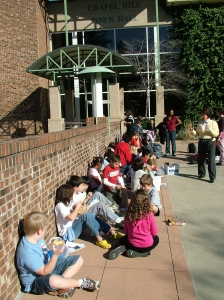 Who will be living in our area in 2020?  What will our population look like?  Where will they want to live?  Work?  All these questions have implications for how we plan.  Although there are no answers for the future, we can look at some of the trends out there to inform our discussion.

We’ve collected several additional demographic presentations detailing national and regional trends that provide more detail to the question of what Chapel Hill’s future may look like Demographic Reports. At the regional level the population of Wake, Durham and Orange County’s is expected to grow from approximately 1,263,000 in 2010 to 2,164,000 in 2040. The population in Orange County is expected to increase from 63,874 in 2010 to 197,675 in 2040.

National and regional population trends support the projections of future growth and offer some insights into the type of growth we might expect. The main drivers of future growth are the combination of the continued aging of the Baby Boom generation and the emergence of Gen Y into the workplace. Some highlights of these studies of the generational impacts over the next decade include:

In the aftermath of the 2008 economic downturn the type and location of future development is being debated. Several recent articles in the New York Times  provide an interesting discussion of how development may be different in the future.

One thought on “The Demographic trends of today”

Let us know what you think! Cancel reply

We invite your participation to DESIGN your community. We are working together to implement all the great ideas generated in Chapel Hill 2020, the new comprehensive plan that sets a vision and a path for growth for Chapel Hill.